Auctioning books takes time. A lot of time. Not just in the preparation, such as drawing up the list, printing and distributing the catalogue, but also during the actual auction days. Typically, the auction of an average collection during the eighteenth century took a couple of days. The auction was divided into morning and afternoon sessions, and the time particular items were sold was clearly stated in the sale conditions. Although of course a potential buyer did not have to be present every day, he could easily grow bored between the auctioning of the items he had potential interest in.

Astonishingly enough, we can see the traces of boredom in the catalogue. Where nowadays someone with paper and pencil is often effortlessly inclined to make doodles, it was no different in the eighteenth century. Most often the drawings the owner left behind in his catalogue, aren’t even that bad. For example, this portrait of a man en profil. 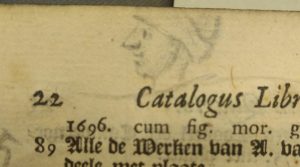 Or this person, who really wanted to win a game of tic-tac-toe, but clearly had a few problems understanding the rules of the game: 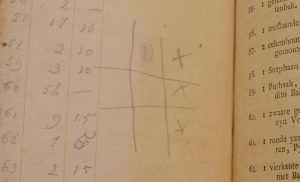 More likely however, is that in this case we are dealing with a special kind of afterlife of catalogues.

Catalogues
Catalogues were meant for consumers. They were (and still are) utilitarian objects: advertising material intended to stimulate sales, and for the majority of potentially interested buyers useless once the auction was over (exceptions are collectors and booksellers, but more on that in a later blog post).

One could compare the eighteenth-century catalogues with the advertising brochures of the local grocery store. Meant for mass marketing and communication, they remain only usable as waste paper once the flyer has been read, or when the weekly offers for soft drinks and washing powder are expired. Or compare them with the IKEA catalogue. With 203 million copies printed each year, it outnumbers the annual print run of the Bible. But how many people have all those annual catalogues neatly next to each other on their book shelf? This demonstrates why only a small percentage of auction catalogues from the eighteenth century have been preserved (a provisional estimate for the Dutch Republic is that around 10-15% have been preserved). And that even when an edition has already been preserved, it is most of the time a unique copy.

Once the auction was over, the catalogues from the past auctions almost immediately turned into waste paper, for all kinds of purposes. This is also the case for the aforementioned ‘tic-tac-toe’-catalogue, which was a catalogue from 1807, made with the purpose of selling the household goods of Johannes van der Saan. Looking at the lines of the game we see that the hand who had drawn the lines was not very practiced. Scrolling through the catalogue we get a glimpse of why that is the case.

Blank paper
At a certain point, presumably after the auction, the catalogue fell into the hands of a small child who gratefully used the empty space (it is an interleaved copy) to practice his or her penmanship. (This can also explain the lack of knowledge of the rules of the tic-tac-toe game.) It was not only a game of tic-tac-toe that was drawn in the catalogue. We can also see how the child practiced the alphabet and learned how to correctly write the numbers 1 to 23. Sometimes the child traced the handwritten characters of the person who used the catalogue during the auction (and who noted some names and prices), in order to learn how to write. It is visible, looking at his or her handwriting, that writing with a pencil was easier than working with pen and ink. 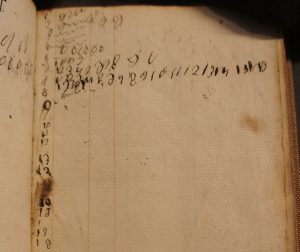 The child also drew two human figures. While the second one is of lesser quality – he or she seems to clamp a long object between two hands/arms – the first one is adorable and clearly recognizable as a man with an unmistakable top hat and pipe. 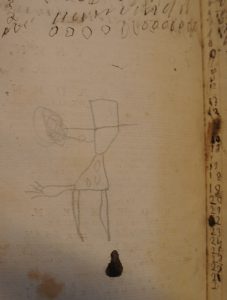 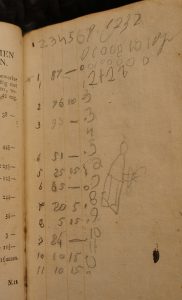 I do not venture to determinate the period in which this child practised his or her penmanship, and I doubt whether the clothing style can be used for dating the drawing, but this catalogue copy shows once again that catalogues can be used for more than just facilitating the sale – the catalogue could also serve as waste paper/blank paper for a child to practice his or her pencil. So, parents of today, preserve the IKEA catalogues in which your child has scribbled, because who knows, in two hundred years’ time… 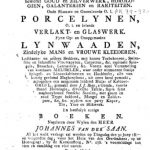 Thanks to Juliette Reboul for providing the first image.

(PS. We can speculate his name was Herman. But what is the meaning of next word: ‘Zijde’? Was it his surname? Although, the word ‘zijde’ itself (meaning ‘silk’) appears several times in the catalogue. Or was the word transcribed from an example on another page?)

Rindert Jagersma is a book historian, specialized in the book trade of Dutch Republic in the seventeenth and eighteenth century. In the MEDIATE project, he focuses on Dutch auction catalogues and their owners.