1693: the collections of two Sephardic rabbis on sale

Two early private library catalogues belonging to Jewish owners were printed in Amsterdam in 1693. They record the collections of two Sephardic rabbis who passed away in the same year: Samuel ben Isaac Abas and Isaac Aboab da Fonseca. These catalogues are interesting in many ways. Not only can they give us an idea how a seventeenth-century library of a Sephardic rabbi looked like, but they also show us the peculiarities of early modern book printing. For example, in the case of these two catalogues it is interesting that they contain Latin translations of the Hebrew text. Let’s have a closer look at these catalogues. 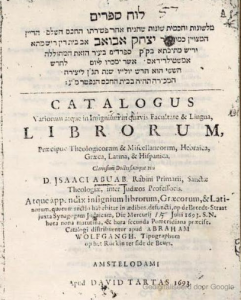 Both the catalogues state the same Hebrew and Latin phrase on its title pages announcing the different languages and subjects of the books:

Stylistically, the title pages look very similar: they start with a Hebrew text followed by a Latin translation. Nevertheless, the catalogues were produced by different publishers, printers, and booksellers, both Christian and Jewish.

Rabbi Abas’ collection and catalogue was published, printed, and sold by the Daniel van den Dalen, a non-Jewish bookseller. The sale of circa 1200 books was held on the third of March 1693 in his bookshop on the Rokin.[1] Only one-fifth of the collection contains Hebrew books; after the Hebrew section the catalogue continues with Latin (more than 400 books), Spanish, Portuguese, French, and Italian books.

The sale of Aboab da Fonseca’s collection was managed by two persons: on the one hand the catalogue was printed by the Jewish printer David de Castro Tartas, and on the other hand the catalogue was distributed by the non-Jewish printer and bookseller Abraham Wolfgangh.[2] It is unclear who of these two men (or both?) held the auction on the 15th of July 1693, that took place in the house of the deceased rabbi. Besides 373 Hebrew items, Aboab owned eighteen Hebrew manuscripts. These are followed by 49 books in Spanish and Portuguese, and four Latin books.

Like the title pages, the Hebrew books in the catalogue are listed with a Latin translation in the column next to the Hebrew title, as can be seen in the illustration. 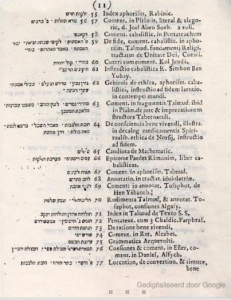 Why did the publishers and printers of both catalogues decide to print the Hebrew text together with a Latin translation? In fact, the more extensive the catalogue, the more expensive the production. Often publishers looked for the cheapest way of printing. For example, as you can see in the next illustration, were possible the books would be listed in two columns on one page out of economic interest. 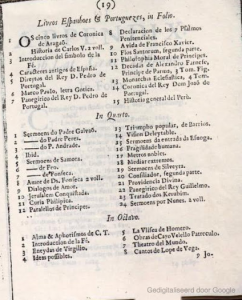 Most likely the decision to print the catalogue in both languages has something to do with the public of buyers. Readers of Jewish and Hebrew books could of course be found within the Jewish communities. However, both collections do not contain only books in Hebrew and books on Jewish subject, but also historical and classical works. The Latin text on the title pages announces these works. Additionally, non-Jewish buyers might have included theologians and ministers looking for Hebrew and Jewish books. Although those who wanted to buy Hebrew books, must have been able to read the Hebrew titles. Possibly, the publishers added Latin translation to the Hebrew titles, for the less quick readers and to make the sale as easy as possible for them.

Therefore, the Latin translations of the Hebrew texts and titles seem to indicate that the publishers aimed at an public of buyers that was as broad as possible: not only did they address the Jewish community, but also non-Jewish buyers. Even though this decision might have led to extra printing costs, attracting a large public would probably have made up for this. 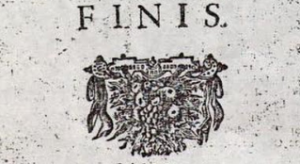