Of Auctions and Collaboration

This blog was published on the Footprints website. Many thanks to Michelle Chesner who allowed us to cross-post it here.

For the last few months I was a visiting scholar at Columbia University, under the wonderful guidance of Michelle Chesner. This emerged from a collaboration between Footprints and MEDIATE. Like Footprints, MEDIATE is a Digital Humanities project focusing on book ownership. It seeks to study the circulation of books and ideas in eighteenth-century Europe by drawing on a unique database of eighteenth-century private library auction catalogues. Within this project I focus on auction catalogues that were printed in the Dutch Republic and list private book collections of Jewish owners.

Both projects seek to collaborate with other projects around the world to expand their knowledge, and to increase the available data. First of all, we can learn from each other’s challenges in developing and constructing a database. Whereas Footprints focuses on Jewish books, within MEDIATE Jewish books are a small part of a broader project. This different focus results in other questions. It was thus a great opportunity for me to be involved in a Digital Humanities project grounded in Jewish scholarship. For example, I was interested to learn how Footprints tackles the issue of Hebrew books that are known by different titles and how to find pragmatic solutions to issues of title variants. This was especially true concerning she’elot u-teshuvot, pirushim, and Bibles – which Footprints organized under the umbrella of a literary work.

To familiarize myself with the database and understand its fundamentals, I searched Columbia’s collection in search of unknown owner’s marks to add as footprints. Going through this rich collection was a real treat and I would like to share two interesting finds. First, in a copy of Tseror ha-Hayyim (Amsterdam, 1738) I found the handwritten annotation by Barukh Almanzi stating that he bought this book from rabbi Raphael Isaiah Azulai of Ancona – and what’s more – it tells us that he purchased it in the year 5576/1816. This is an important detail, because until now, no date had been known for this transaction of books that once belonged to Raphael Isaiah’s father Joseph David Azulai (also known as the HIDA), and of which Columbia’s Judaica collection has many more books.

Another interesting find was in a copy of Midrash Shoher Tov (Prague, 1613). While this book has several owner’s marks on the title page, it got especially exciting when I encountered an annotation on fol. 7r. It states the following: אני מרים בת הרב המופלג מהורר אברהם יצו שליען, loosely translated as ‘I Miriam daughter of rabbi Abraham Schlein’. It is a rare Footprint for the fact that Miriam, as a woman, left a mark on the book that passed through her hands. Did Miriam own this book or should we list her as a viewer of the book that might have belonged to her father?

Although these finds are a side note of my own research, it was relevant to work in Footprints for another aspect of our collaboration: the exchange of data. Whereas MEDIATE’s database is created around a single set of sources – that is, private library catalogues – Footprints uses a large variety of sources. While both projects have their own focus, they also complement one another. The sources for my research are also a rich source for possible footprints. The eighteenth-century auction catalogues I study provide us with the lists of the books collected and owned by (mostly) Dutch Jews. So, it does not concern owner’s marks in physical copies of book, but rather ownership based on another historical source, i.e. auction catalogues. These footprints are therefore indicated as ‘historical copies’. Thereby, I should note that most of the lot descriptions state very little information – with often only a title of a work. To have sufficient information for a Footprint, I have been trying to match those lots to imprints wherever possible.

From another perspective, the books listed were sold at auctions and through this second hand book market scattered over The Netherlands and the rest of Europe. Therefore we might be able to find traces of these books after these auctions through Footprints, and thus can link certain lots of eighteenth-century auctions to physical copies. For example, in the most recent blog post by Chaim Meiselman, I was delighted to see the name of David Nunes Torres, rabbi of a Portuguese Jewish community in the Dutch Republic. He owned a rich collection that was auctioned in 1728 in The Hague. While we encounter him in this case not in the capacity of an owner, it shows great potential for other connections.

And, indeed, in the database I came across several footprints that can be linked to specific lots within an auction catalogue listing the collection of the famous poet and scholar Solomon ben Joel Dubno (1738-1813). On the 13th of July 1814, his collection was auctioned in Amsterdam, where he had lived for the last two decades of his life. One of these footprints can be found in a copy of Levi ben Gershon’s commentary on the Torah (Venice, 1547), held nowadays by Eli Genauer. The upper part of the title page bears the signature of Solomon Dubno, which shows how he referred to himself in Hebrew: שלמה מדובנא, Solomon of Dubno, the place he was born. 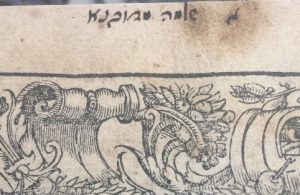 Accordingly, I found in the auction catalogue of his collection under Folio lot 349 (p.10) the following entry:

Although only the place of imprint is stated, and not the date or any copy specific information, I would argue that it most likely concerns here the above copy. In turn, one copy of the auction catalogue, held by the University of Amsterdam, also has handwritten annotations of buyers and prices. Lot 349 was bought by a certain I. Grobety for 1.16 [florins]. Accordingly, two additional footprints can be linked to this specific copy; for the sale of the collection at Amsterdam, and for I. Groberty’s acquisition of the book.

In conclusion, a collaboration between projects like Footprints and MEDIATE not only provides us with the opportunity to enrich the databases, but it also makes it possible to reconnect historical collections that only exist in an early modern catalogue to physical copies scattered around the world, and vice versa.